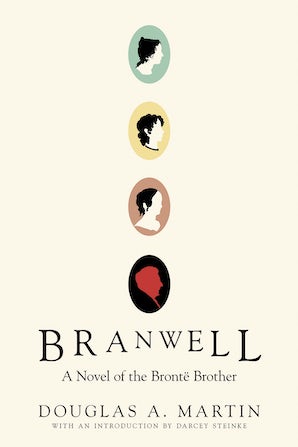 A Novel of the Brontë Brother

By Douglas A. Martin Introduction by Darcey Steike

For readers of Michael Cunningham's The Hours and Madeline Miller's Song of Achilles, this genre-bending exploration of the tragic figure of Branwell Brontë and the dismal, dazzling landscape that inspired his sisters to greatness is now available in a new edition with an introduction by Darcey Steinke.

Branwell Brontë—brother of Charlotte, Emily, and Anne—has a childhood marked by tragedy and the weight of expectations. After the early deaths of his mother and a beloved older sister, he is kept away from school and tutored at home by his father, a curate, who rests all his ambitions for his children on his only son. Branwell grows up isolated in his family’s parsonage on the moors, learning Latin and Greek, being trained in painting, and collaborating on endless stories and poems with his sisters.

Yet while his sisters go on to write Wuthering Heights, Jane Eyre, and Agnes Grey, Branwell wanders from job to job, growing increasingly dependent on alcohol and opium and failing to become a great poet or artist.

With rich, suggestive sentences “perfectly fitted to this famously imaginative, headstrong family” (Publishers Weekly), Branwell is a portrait of childhood dreams, thwarted desire, the confinements of gender—and an homage to the landscape and milieu that inspired some of the most revolutionary works of English literature.

Douglas A. Martin’s first novel, Outline of My Lover, was an International Book of the Year in The Times Literary Supplement, a finalist for a Lambda Literary Award, and adapted for the multimedia ballet/live film Kammer/Kammer. His books of poetry and prose include In the Time of Assignments, Your Body Figured, and Acker. He is co-author of The Haiku Year and co-editor of Kathy Acker: The Last Interview and Other Conversations.