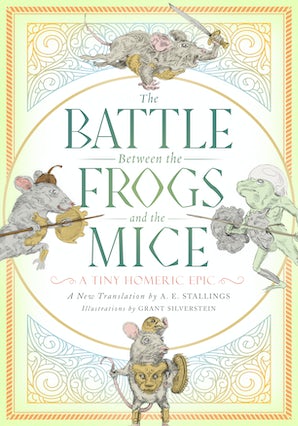 The Battle between the Frogs and the Mice

"A virtuosic, witty, charming translation of the greatest epic ever written about mice, with wonderful illustrations by Grant Silverstein. Stallings' elegant rhyming couplets are the perfect choice to honor the mousy Muse."—Emily Wilson, Professor of Classics, University of Pennsylvania

"Stallings' translation of this ancient epic is a delight: charming, witty, and vividly alive, with buoyant rhymes and eye-catching illustrations. I suspect this will become a beloved addition in many home libraries."—Madeline Miller, bestselling author of Circe

From the award-winning poet and translator A. E. Stallings comes a lively new edition of the ancient Greek fable The Battle between the Frogs and the Mice. Originally attributed to Homer, but now thought to have been composed centuries later by an unknown author, The Battle is the tale of a mouse named Crumbsnatcher who is killed by the careless frog King Pufferthroat, sparking a war between the two species. This dark but delightful parable about the foolishness of war is illustrated throughout in striking drawings by Grant Silverstein.

The clever introduction is written from the point of view of a mouse who argues that perhaps the unknown author of the fable is not a human after all: “Who better than a mouse, then, to compose our diminutive, though not ridiculous, epic, a mouse born and bred in a library, living off lamp oil, ink, and the occasional nibble of a papyrus, constantly perched on the shoulder of some scholar or scholiast of Homer, perhaps occasionally whispering in his ear? Mouse, we may remember, is only one letter away from Muse.”

A. E. Stallings is an American poet who has lived in Athens, Greece since 1999. She studied Classics at the University of Georgia, and later at Oxford University. She has published four collections of poetry, Archaic Smile (which won the 1999 Richard Wilbur Award), Hapax (recipient of the Poets’ Prize), Olives (a finalist for the National Book Critics Circle Award), and Like (a finalist for the Pulitzer Prize in Poetry). Her translation of Lucretius (into rhyming fourteeners), The Nature of Things, was called by Peter Stothard in the TLS “One of the most extraordinary classical translations of recent times.”

Stallings has received a translation grant from the National Endowment for the Arts (US), and fellowships from the Guggenheim Foundation and United States Artists, as well as a "genius grant" from the MacArthur Foundation. She is also a member of the American Academy of Arts and Sciences. Her work is widely anthologized, and has been included in the Best American Poetry in 1994, 2000, and 2015, and in the Best of the Best American Poetry (ed. Robert Pinsky). Her poems appear in The Atlantic Monthly, The Beloit Poetry Review, The Dark Horse, The New Yorker, Poetry, Poetry Magazine, Poetry Review, and the TLS, among others. She also contributes essays and reviews to the American Scholar, Parnassus, Poetry Magazine, Poetry Review, the TLS, and the Yale Review.

Stallings is married to the journalist, John Psaropoulos, and has two children, Jason and Atalanta.

Grant Silverstein is an American artist who specializes in etchings of a narrative character and in studies of figures, landscapes, and animals. With his wife and two cats, he spends winters holed up in his studio in rural Pennsylvania, where he uses a catch and release system for visiting mice and the occasional frog. Come spring, he ventures forth to display his work at outdoor festivals; he feels fortunate to have made his living this way for forty years. He has illustrated two previous Paul Dry Books titles, Davey McGravy by David Mason and The Verb 'To Bird' by Peter Cashwell.