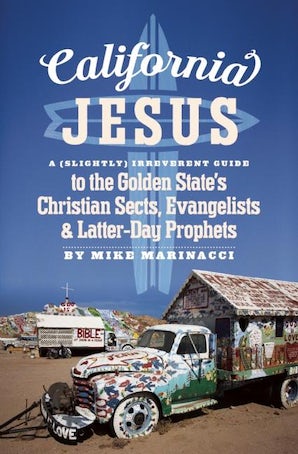 California, long a Mecca for eccentric cults, has also hosted more than its share of unusual and unorthodox Christian evangelists and sects. From pre-Gold Rush days to the 21st Century, visionaries seeking to revive or transform the Faith have flocked to California’s shores, or have emerged from its environs as native sons and daughters. Their often-idiosyncratic crusades have influenced not only Golden State history and culture, but Christianity as a whole.

California Jesus tells the little-known yet fascinating stories behind the people and groups that populate Californian Christendom, including:

 The Children of God  Born on the Huntington Beach boardwalk, this Jesus People” hippie-ministry turned to prostituting its members and molesting its children in the name of Christ

 Joe Jeffers  a renegade Baptist minister who started a murderous religious war between his followers and a rival’s, made headlines in lurid L.A. sex scandals, and claimed that Yahweh” had stashed several billion dollars for him in the constellation Orion

 Church of the Holy Family  film-star Mel Gibson’s schismatic, secretive Malibu parish, which claims to be literally more Catholic than the Pope

 Holy Mountain  a huge, bizarre, ever-growing folk-art monument in the Imperial Valley desert built by an aging drifter to glorify God’s love, that’s now become an international tourist destination
 And many, many more!

Filled with captivating anecdotes about the state’s most colorful and controversial Christian pastors and sects, and accompanied by many rare photos and illustrations, California Jesus illuminates this absorbing yet little-discussed aspect of both state history and culture, and the Christian experience. Believers and doubters alike, as well as anyone interested in the Golden State’s unique spiritual heritage, will find this work hard to put down.