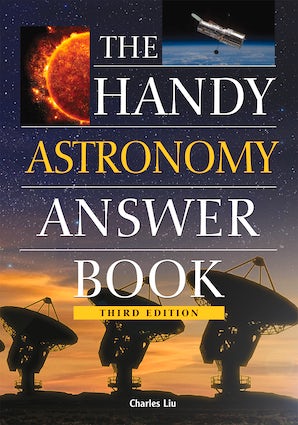 Unraveling the Mysteries of the Night Sky. Fact-filled and image-rich guide to the principles of astronomy, its history, a host of fun facts, and helpful tips for the backyard or budding astronomers!

We look to the heavens and wonder in awe. Shooting stars, constellations, planets, galaxies, and the unknown. What is out there? Who is out there? How did the stars and planets come to be? What does it all mean? The last few years have brought an explosion of information leading to serious consideration of questions once deemed crazy. Do other universes exist? Are there planets that could harbor life?

From a neutron star to a black hole; from the Higgs Boson particle to cosmic strings; from the speed of light to gamma radiation; plus a universe of ideas and concepts in between, The Handy Astronomy Answer Book takes you on a journey through the history, science and the latest findings in astronomy. This book tells the story of astronomy—of the cosmos and its contents, and of humanity’s efforts throughout history to unlock its secrets and solve its mysteries. You’ll learn the answers to more than 1,000 questions on astronomy and space, including …

From the basic physics and history of astronomy to using star charts, telescopes, and other helpful hints for the home astronomer, and from space mission programs to the greatest adventure of all—the search for life beyond Earth—The Handy Astronomy Answer Book includes information on virtually every topic related to outer space. Containing over 120 illustrations and photos, this book brings the wonders of our universe to life!

Charles Liu is a professor of astrophysics at the City University of New York's College of Staten Island and an associate with the Hayden Planetarium and Department of Astrophysics at the American Museum of Natural History. His research focuses on colliding galaxies, starburst galaxies, quasars, and the star formation history of the universe. In addition to his research publications, Liu also writes for students and general audiences; including Visible Ink Press’ popular The Handy Astronomy Answer Book and The Handy Physics Answer Book, as well as StarTalk with Neil DeGrasse Tyson and Jeffery Lee Simons. For his work with students, he has received the American Institute of Physics Science Writing Award and the Award for Popular Writing on Solar Physics from the American Astronomical Society. Until recently, he served as Education Officer and Trustee of the American Astronomical Society, and he currently serves as president of the Astronomical Society of New York. He earned degrees in astronomy, astrophysics, and physics from Harvard and the University of Arizona, and he held postdoctoral positions at Kitt Peak National Observatory and at Columbia University. He and his wife have a daughter and two sons.