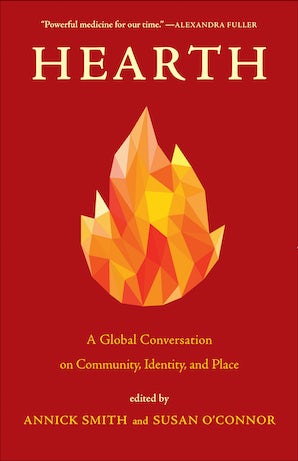 A Global Conversation on Identity, Community, and Place

A multicultural anthology, edited by Susan O’Connor and Annick Smith, about the enduring importance and shifting associations of the hearth in our world.

A hearth is many things: a place for solitude; a source of identity; something we make and share with others; a history of ourselves and our homes. It is the fixed center we return to. It is just as intrinsically portable. It is, in short, the perfect metaphor for what we seek in these complex and contradictory times—set in flux by climate change, mass immigration, the refugee crisis, and the dislocating effects of technology.

Featuring original contributions from some of our most cherished voices—including Terry Tempest Williams, Bill McKibben, Pico Iyer, Natasha Trethewey, Luis Alberto Urrea, and Chigozie Obioma—Hearth suggests that empathy and storytelling hold the power to unite us when we have wandered alone for too long. This is an essential anthology that challenges us to redefine home and hearth: as a place to welcome strangers, to be generous, to care for the world beyond one’s own experience.