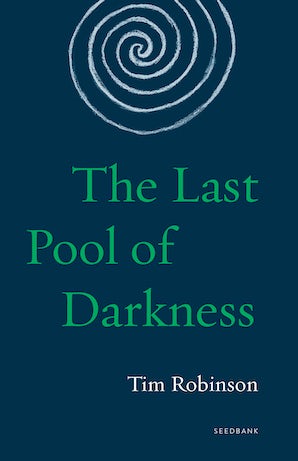 The Last Pool of Darkness

In the second volume of his beloved Connemara trilogy, cartographer Tim Robinson continues to unearth the stories of this rich landscape—weaving placelore, etymology, geology, and the meeting of sea and shore into the region’s mythologies.

From the northern fiord waters of Killary Harbour to the southern sea-washed islands of Slyne Head, western Connemara awes with a rugged landscape: sloping cliffs, towering mountains, and the ever-present thudding of the Atlantic. And here, within the earth, resides the record of the past; stones with ash-grey centers reveal volcanic episodes, a series of mysteriously arranged quartz boulders reminds us of the ancient secrets held in the soil, and a long-disappeared lake filled in by sand lies beneath a golf course, waiting to be rediscovered.

Mapping more than geography, Tim Robinson charts Connemara’s deep relationship to those who have inhabited its surface. The Last Pool of Darkness brims with tales of ghosts, centuries-old land disputes, periods of religious and political upheavals, philosophers entranced by the isolating landscape, poets, mathematicians, artists, fantastical smugglers, the discovery of botanical rarities, trickster fairies, and the delicate balance between humans and nature. Not merely a “certain tract of the Earth’s surface” but “an accumulation of connotations,” Robinson’s Connemara offers readers an opportunity to travel across space and time.

A work of great precision and tenderness, The Last Pool of Darkness is an enchanting addition to the Seedbank series and next chapter in “one of the most remarkable non-fiction projects undertaken in English” (Robert Macfarlane).