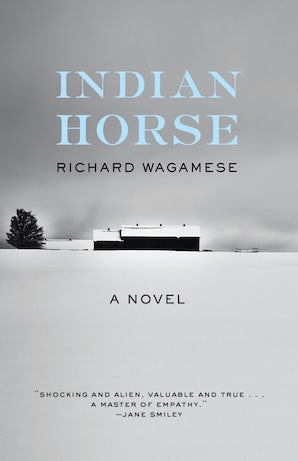 Named a "Best Novel of the Decade" by Literary Hub

Saul Indian Horse is a child when his family retreats into the woods. Among the lakes and the cedars, they attempt to reconnect with half-forgotten traditions and hide from the authorities who have been kidnapping Ojibway youth. But when winter approaches, Saul loses everything: his brother, his parents, his beloved grandmother—and then his home itself.

Alone in the world and placed in a horrific boarding school, Saul is surrounded by violence and cruelty. At the urging of a priest, he finds a tentative salvation in hockey. Rising at dawn to practice alone, Saul proves determined and undeniably gifted. His intuition and vision are unmatched. His speed is remarkable. Together they open doors for him: away from the school, into an all-Ojibway amateur circuit, and finally within grasp of a professional career. Yet as Saul’s victories mount, so do the indignities and the taunts, the racism and the hatred—the harshness of a world that will never welcome him, tied inexorably to the sport he loves.

Spare and compact yet undeniably rich, Indian Horse is at once a heartbreaking account of a dark chapter in our history and a moving coming-of-age story.

Richard Wagamese (1955–2017) was one of Canada’s foremost writers, and one of the leading indigenous writers in North America. He was the author of several acclaimed memoirs and more than a dozen novels. He won numerous awards and honors for his writing, including the People’s Choice winner of the national Canada Reads competition in 2013, for Indian Horse.