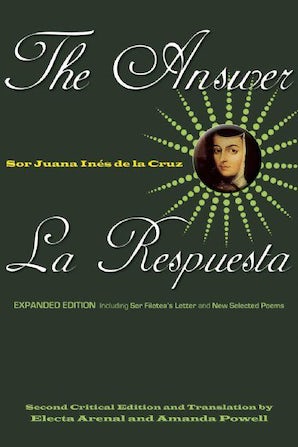 Publisher: The Feminist Press at CUNY

Defiant writing by the first feminist of the Americas—the Mexican nun Sor Juana Inés de la Cruz—in response to the church officials that tried to silence her.

Known as the first feminist of the Americas, the Mexican nun Sor Juana Inés de la Cruz enjoyed an international reputation as one of the great lyric poets and dramatists of her time. The Answer/La Respuesta (1691) is is Sor Juana's impassioned response to years of attempts by church officials to silence her. While earlier translators have ignored Sor Juana's keen awareness of gender, this volume brings out her own emphasis and diction, and reveals the remarkable scholarship, subversiveness, and even humor she drew on in defense of her cause.

This expanded, bilingual edition combines new research and perspectives on an inspired writer and thinker. It includes the fully annotated primary text responding to the church officials; the letter that ultimately provoked the writing of The Answer; an expanded selection of poems; an updated bibliography; and a new preface.

Sor Juana Inés de la Cruz (1648/51-1695), a Mexican nun, was a brilliant poet, playwright, and essayist whose persistent defense of the intellectual rights of women brought her increasingly into conflict with church officials, who repeated tried to silence her. Sor Juana died by taking care her sister nuns during a plague in April 1695.