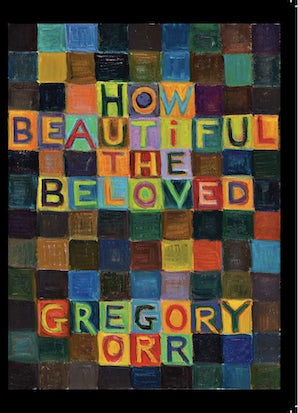 How Beautiful the Beloved

“[D]azzling and timeless . . . focus is so unwaveringly aimed toward the transcendent—not God, but the beloved—that we seem to slip into a less cluttered time.”—The Virginia Quarterly Review, “Editor’s Choice”

"Mary Oliver calls him '...a Walt Whitman without an inch of Whitman's bunting or oratory.' In these pages, he is more nearly a modern-day Rumi. This is not primarily a poetry of image, but of ideas, perfectly distilled. Orr brings together the monumental themes of love and loss in small, spare, and exquisite koan-like poems."—ForeWord

"...magnetic poems that open the world of lyrical verse to the larger questions of what is true and timeless."
—The Bloomsbury Review

Gregory Orr continues his acclaimed project on the “beloved” with a lyrical sequence about the joys and hungers of being fully engaged in life. Through concise, perfectly formed poems, he wakes us to the ecstatic possibilities of recognizing and risking love. Mary Oliver has called this project “gorgeous,” and said that he "speaks of the events that have no larger or more important rival in our lives—of our love and our loving."

If to say it once
And once only, then still
To say: Yes.

And say it complete,
Say it as if the word
Filled the whole moment
With its absolute saying.

Gregory Orr is the author of ten books of poetry. He teaches at the University of Virginia and lives in Charlottesville.

Gregory Orr is the author of ten books of poetry, four collections of criticism, and a memoir that was selected by Publishers Weekly as a "Best Book of the Year." The former poetry editor for the Virginia Quarterly Review, Orr teaches at the University of Virginia and lives in Charlottesville.