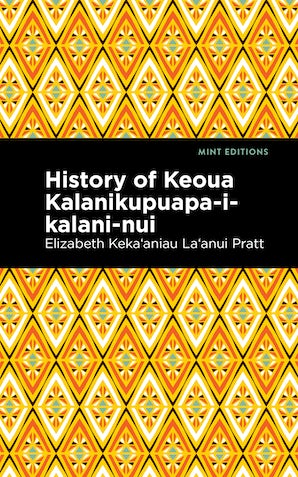 History of Keoua Kalanikupuapa-i-kalani-nui, Father of Hawaiian Kings is a genealogical history by Elizabeth Kekaʻaniau La‘anui Pratt. Written towards the end of Pratt’s life, the book was intended as a tribute to her family’s history and influence in Hawaii. Raised as a member of the House of Keōua Nui, she was closely related to the first rulers of the Hawaiian Kingdom. Engaging with traditions and stories from before the arrival of Protestant missionaries in the islands, Pratt provides a link to the past, before Christianity and written language usurped the oral tradition of her people. “Comely of person and gracious to all he met, Keoua as he verged toward manhood became an attractive personage. While yet awaiting the fulfillment of the plighted troth of his childhood, rumors of events in Maui royal circles were wafted across he waters of Alenuihaha channel which stirred his ambition.” Born the son of High Chief Keeaumoku Nui, Keoua was known for his sacred power, or kapu, of determining the safety and danger of his people by observing the formation of rain clouds. With his wisdom and leadership, he proved an excellent role model for his son Kamehameha I, the first ruler of the Hawaiian Kingdom who unified the islands in 1795. Detailed and enriched with Elizabeth’s personal relation to the figures she describes, the History of Keoua Kalanikupuapa-i-kalani-nui, Father of Hawaiian Kings is an essential study of one of Hawaii’s most important leaders. With a beautifully designed cover and professionally typeset manuscript, this edition of Elizabeth Kekaʻaniau La‘anui Pratt’s History of Keoua Kalanikupuapa-i-kalani-nui, Father of Hawaiian Kings is a classic work of Hawaiian literature reimagined for modern readers.