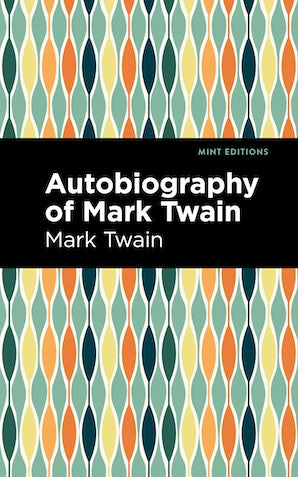 Mint Editions—In Their Own Words: Biographical and Autobiographical Narratives

Autobiography of Mark Twain (1907) is a collection of autobiographical writings by American humorist Mark Twain. Dictated toward the end of his life, the Autobiography of Mark Twain is a series of brief reflections on 74 years of fame, hard work, and adventure by an icon of American literature. Originally serialized in the North American Review, the United States’ oldest literary magazine, the Autobiography of Mark Twain has gone through countless editions in the century after Twain’s death, and is considered a masterpiece of literary nonfiction. “I intend that this autobiography shall become a model for all future autobiographies when it is published […] because of its form and method—a form and method whereby the past and the present are constantly brought face to face, resulting in contrasts which newly fire up the interest all along, like contact of flint with steel.” Focusing on the small events, unremarkable encounters, and marginalia which make a life both common and particular, Mark Twain envisions a model of autobiography capable of dispelling the myth of the writer as a man of fortune and mysterious talent. Capturing episodes from his youth and the early stages of his writing career, reflecting on the importance of his wife Olivia and daughter Susy, and describing the influence of labor on his philosophy of life, Twain invites his reader to recognize him not just as Samuel Clemens, his birth name, but as a man who lived and worked and triumphed and suffered alongside others, as a man whose success was a testament to the power of community. With a beautifully designed cover and professionally typeset manuscript, this edition of Mark Twain’s Autobiography of Mark Twain is a classic of American literature reimagined for modern readers.