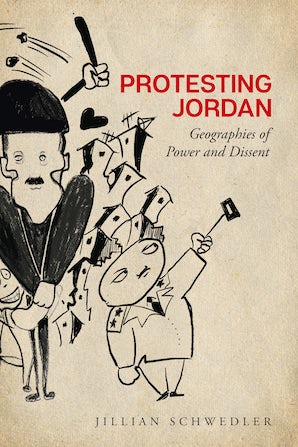 Geographies of Power and Dissent

A National Endowment for Democracy Notable Book of 2022

Protest has been a key method of political claim-making in Jordan from the late Ottoman period to the present day. More than moments of rupture within normal-time politics, protests have been central to challenging state power, as well as reproducing it—and the spatial dynamics of protests play a central role in the construction of both state and society. With this book, Jillian Schwedler considers how space and geography influence protests and repression, and, in challenging conventional narratives of Hashemite state-making, offers the first in-depth study of rebellion in Jordan.

Based on twenty-five years of field research, Protesting Jordan examines protests as they are situated in the built environment, bringing together considerations of networks, spatial imaginaries, space and place-making, and political geographies at local, national, regional, and global scales. Schwedler considers the impact of time and temporality in the lifecycles of individual movements. Through a mixed interpretive methodology, this book illuminates the geographies of power and dissent and the spatial practices of protest and repression, highlighting the political stakes of competing narratives about Jordan's past, present, and future.

Jillian Schwedler is Professor of Political Science at Hunter College and the Graduate Center, City University of New York. She is the author of Faith in Moderation: Islamist Parties in Jordan and Yemen (2006).