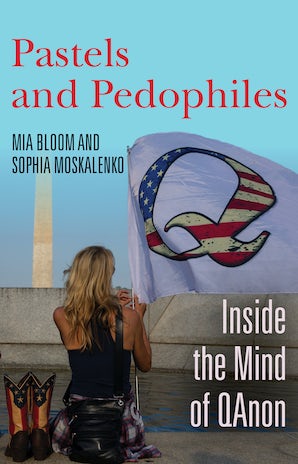 Inside the Mind of QAnon

By Mia Bloom and Sophia Moskalenko

Two experts of extremist radicalization take us down the QAnon rabbit hole, exposing how the conspiracy theory ensnared countless Americans, and show us a way back to sanity.

In January 2021, thousands descended on the U.S. Capitol to aid President Donald Trump in combating a shadowy cabal of Satan-worshipping pedophiles. Two women were among those who died that day. They, like millions of Americans, believed that a mysterious insider known as "Q" is exposing a vast deep-state conspiracy. The QAnon conspiracy theory has ensnared many women, who identify as members of "pastel QAnon," answering the call to "save the children."

With Pastels and Pedophiles, Mia Bloom and Sophia Moskalenko explain why the rise of QAnon should not surprise us: believers have been manipulated to follow the baseless conspiracy. The authors track QAnon's unexpected leap from the darkest corners of the Internet to the filtered glow of yogi-mama Instagram, a frenzy fed by the COVID-19 pandemic that supercharged conspiracy theories and spurred a fresh wave of Q-inspired violence.

Pastels and Pedophiles connects the dots for readers, showing how a conspiracy theory with its roots in centuries-old anti-Semitic hate has adapted to encompass local grievances and has metastasized around the globe—appealing to a wide range of alienated people who feel that something is not quite right in the world around them. While QAnon claims to hate Hollywood, the book demonstrates how much of Q's mythology is ripped from movie and television plot lines.

Finally, Pastels and Pedophiles lays out what can be done about QAnon's corrosive effect on society, to bring Q followers out of the rabbit hole and back into the light.

Mia Bloom is the International Security Fellow at New America, professor at Georgia State University, and member of the Evidence-Based Cybersecurity Research Group. She has authored books on violent extremism including Small Arms: Children and Terrorism (2019), Bombshell: Women and Terrorism (2011), and Dying to Kill: The Allure of Suicide Terror (2005). Sophia Moskalenko is a psychologist studying mass identity, inter-group conflict, and conspiracy theories. She has written several books, including the award-winning Friction: How Conflict Radicalizes Them and Us (2011) and The Marvel of Martyrdom: The Power of Self-Sacrifice in the Selfish World (2019).