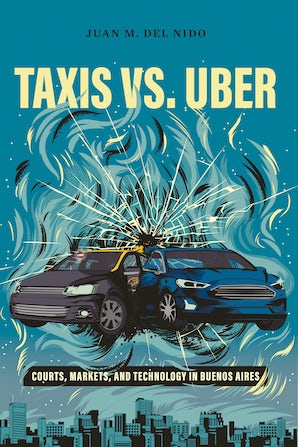 Uber's April 2016 launch in Buenos Aires plunged the Argentine capital into a frenzied hysteria that engulfed courts of law, taxi drivers, bureaucrats, the press, the general public, and Argentina's president himself. Economist and anthropologist Juan M. del Nido, who had arrived in the city six months earlier to research the taxi industry, suddenly found himself documenting the unprecedented upheaval in real time. Taxis vs. Uber examines the ensuing conflict from the perspective of the city's globalist, culturally liberal middle class, showing how notions like monopoly, efficiency, innovation, competition, and freedom fueled claims that were often exaggerated, inconsistent, unverifiable, or plainly false, but that shaped the experience of the conflict such that taxi drivers' stakes in it were no longer merely disputed but progressively written off, pathologized, and explained away.

This first book-length study of the lead-up to and immediate aftermath of the arrival of a major platform economy to a metropolitan capital considers how the clash between Uber and the traditional taxi industry played out in courtrooms, in the press, and on the street. Looking to court cases, the politics of taxi licenses, social media campaigns, telecommunications infrastructure, public protests, and Uber's own promotional materials, del Nido examines the emergence of "post-political reasoning": an increasingly common way in which societies neutralize disagreement, shaping how we understand what we can even legitimately argue about and how.