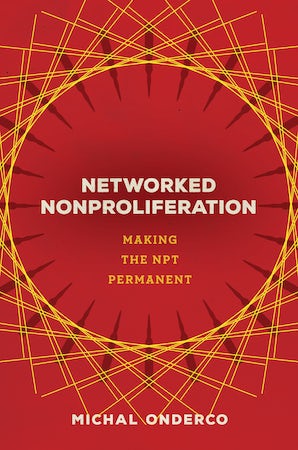 The Treaty on Non-Proliferation of Nuclear Weapons (NPT) had many opponents when, in 1995, it came up for extension. The majority of parties opposed extension, and experts expected a limited extension as countries sought alternative means to manage nuclear weapons. But against all predictions, the treaty was extended indefinitely, and without a vote.

Networked Nonproliferation offers a social network theory explanation of how the NPT was extended, giving new insight into why international treaties succeed or fail. The United States was the NPT's main proponent, but even a global superpower cannot get its way through coercion or persuasion alone. Michal Onderco draws on unique in-depth interviews and newly declassified documents to analyze the networked power at play. Onderco not only gives the richest account yet of the conference, looking at key actors like South Africa, Egypt, and the EU, but also challenges us to reconsider how we think about American power in international relations.

With Networked Nonproliferation, Onderco provides new insight into multilateral diplomacy in general and nuclear nonproliferation in particular, with consequences for understanding a changing global system as the US, the chief advocate of nonproliferation and a central node in the diplomatic networks around it, declines in material power.