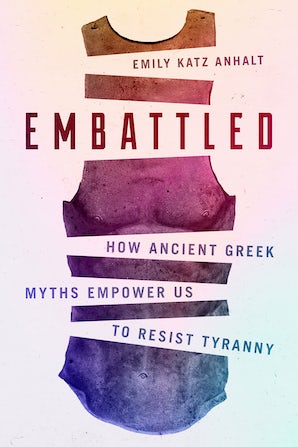 How Ancient Greek Myths Empower Us to Resist Tyranny

An incisive exploration of the way Greek myths empower us to defeat tyranny.

As tyrannical passions increasingly plague twenty-first-century politics, tales told in ancient Greek epics and tragedies provide a vital antidote. Democracy as a concept did not exist until the Greeks coined the term and tried the experiment, but the idea can be traced to stories that the ancient Greeks told and retold. From the eighth through the fifth centuries BCE, Homeric epics and Athenian tragedies exposed the tyrannical potential of individuals and groups large and small. These stories identified abuses of power as self-defeating. They initiated and fostered a movement away from despotism and toward broader forms of political participation.

Following her highly praised book Enraged: Why Violent Times Need Ancient Greek Myths, the classicist Emily Katz Anhalt retells tales from key ancient Greek texts and proceeds to interpret the important message they hold for us today. As she reveals, Homer's Iliad and Odyssey, Aeschylus's Oresteia, and Sophocles's Antigone encourage us—as they encouraged the ancient Greeks—to take responsibility for our own choices and their consequences. These stories emphasize the responsibilities that come with power (any power, whether derived from birth, wealth, personal talents, or numerical advantage), reminding us that the powerful and the powerless alike have obligations to each other. They assist us in restraining destructive passions and balancing tribal allegiances with civic responsibilities. They empower us to resist the tyrannical impulses not only of others but also in ourselves.

In an era of political polarization, Embattled demonstrates that if we seek to eradicate tyranny in all its toxic forms, ancient Greek epics and tragedies can point the way.

Emily Katz Anhalt is Professor of Classics at Sarah Lawrence College. Her most recent book is Enraged: Why Violent Times Need Ancient Greek Myths, which was selected as one of the Times Literary Supplement's Best Books of 2017.