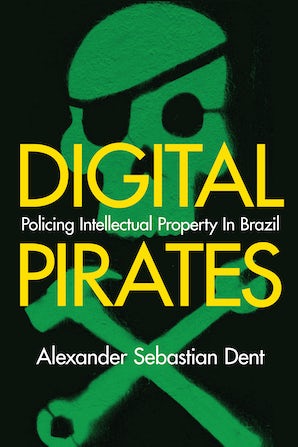 Digital Pirates examines the unauthorized creation, distribution, and consumption of movies and music in Brazil. Alexander Sebastian Dent offers a new definition of piracy as indispensable to current capitalism alongside increasing global enforcement of intellectual property (IP). Complex and capricious laws might prohibit it, but piracy remains a core activity of the twenty-first century.

Combining the tools of linguistic and cultural anthropology with models from media studies and political economy, Digital Pirates reveals how the dynamics of IP and piracy serve as strategies for managing the gaps between texts—in this case, digital content. Dent's analysis includes his fieldwork in and around São Paulo with pirates, musicians, filmmakers, police, salesmen, technicians, policymakers, politicians, activists, and consumers. Rather than argue for rigid positions, he suggests that Brazilians are pulled in multiple directions according to the injunctions of international governance, localized pleasure, magical consumption, and economic efficiency. Through its novel theorization of "digital textuality," this book offers crucial insights into the qualities of today's mediascape as well as the particularized political and cultural norms that govern it. The book also shows how twenty-first century capitalism generates piracy and its enforcement simultaneously, while producing fraught consumer experiences in Latin America and beyond.