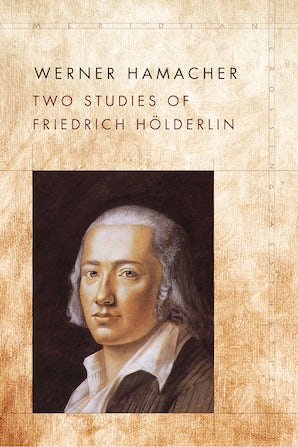 Two Studies of Friedrich Hölderlin shows how the poet enacts a radical theory of meaning that culminates in a unique and still groundbreaking concept of revolution, one that begins with a revolutionary understanding of language. The product of an intense engagement with both Walter Benjamin and Jacques Derrida, the book presents Werner Hamacher's major attempts at developing a critical practice commensurate with the immensity of Hölderlin's late writings.

These essays offer an incisive and innovative combination of critical theory and deconstruction while also identifying where influential critics like Heidegger fail to do justice to the poet's astonishing radicality. Readers will not only come away with a new appreciation of Hölderlin's poetic and political-theoretical achievements but will also discover the motivating force behind Hamacher's own achievements as a literary scholar and political theorist.

An introduction by Julia Ng and an afterword by Peter Fenves provide further information about these studies and the academic and theoretical context in which they were composed.