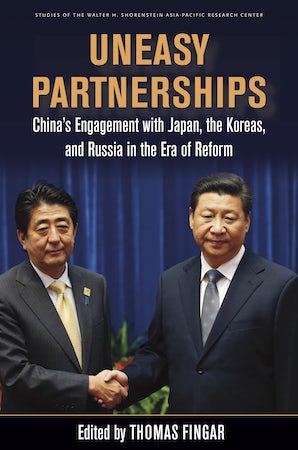 China’s Engagement with Japan, the Koreas, and Russia in the Era of Reform

Uneasy Partnerships presents the analysis and insights of practitioners and scholars who have shaped and examined China's interactions with key Northeast Asian partners. Using the same empirical approach employed in the companion volume, The New Great Game (Stanford, 2016), this new text analyzes the perceptions, priorities, and policies of China and its partners to explain why dyadic relationships evolved as they have during China's "rise."

Synthesizing insights from an array of research, Uneasy Partnerships traces how the relationships that formed between China and its partner states—Japan, the Koreas, and Russia—resulted from the interplay of competing and compatible objectives, as well as from the influence of third-country ties. These findings are used to identify patterns and trends and to develop a framework that can be used to illuminate and explain Beijing's engagement with the rest of the world.

Thomas Fingar is Shorenstein Distinguished Fellow in the Freeman Spogli Institute for International Studies at Stanford University. Previously, he served concurrently as the first Deputy Director for National Intelligence for Analysis and Chairman of the National Intelligence Council. He is the author of Reducing Uncertainty: Intelligence Analysis and National Security (Stanford, 2011) and editor of The New Great Game: China and South and Central Asia in the Era of Reform.