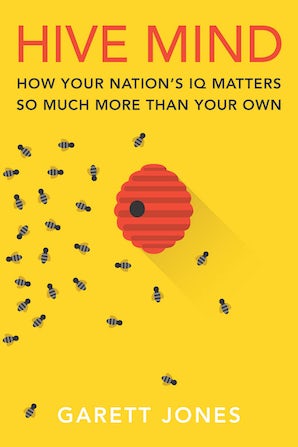 Over the last few decades, economists and psychologists have quietly documented the many ways in which a person's IQ matters. But, research suggests that a nation's IQ matters so much more.

As Garett Jones argues in Hive Mind, modest differences in national IQ can explain most cross-country inequalities. Whereas IQ scores do a moderately good job of predicting individual wages, information processing power, and brain size, a country's average score is a much stronger bellwether of its overall prosperity.

Drawing on an expansive array of research from psychology, economics, management, and political science, Jones argues that intelligence and cognitive skill are significantly more important on a national level than on an individual one because they have "positive spillovers." On average, people who do better on standardized tests are more patient, more cooperative, and have better memories. As a result, these qualities—and others necessary to take on the complexity of a modern economy—become more prevalent in a society as national test scores rise. What's more, when we are surrounded by slightly more patient, informed, and cooperative neighbors we take on these qualities a bit more ourselves. In other words, the worker bees in every nation create a "hive mind" with a power all its own. Once the hive is established, each individual has only a tiny impact on his or her own life.

Jones makes the case that, through better nutrition and schooling, we can raise IQ, thereby fostering higher savings rates, more productive teams, and more effective bureaucracies. After demonstrating how test scores that matter little for individuals can mean a world of difference for nations, the book leaves readers with policy-oriented conclusions and hopeful speculation: Whether we lift up the bottom through changing the nature of work, institutional improvements, or freer immigration, it is possible that this period of massive global inequality will be a short season by the standards of human history if we raise our global IQ.