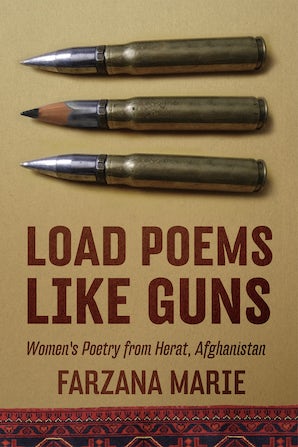 “Load Poems Like Guns is an important book. It gives an eloquent and wrenching witness to voices from another place and another poetry: voices with a unique mix of formal power and personal pain. Eight Afghan women poets are eloquently translated here by Farzana Marie, including the tragic and luminously gifted Nadia Anjuman. This is a bilingual edition; the English and Dari are side by side, allowing us a glimpse of the mysterious and profound Persian poetic tradition. This is a book every poet and every reader of poetry should seek out. It amplifies our understanding. It broadens our sense of the identity of the poet. Above all, it makes available a rich and troubling narrative we need to hear.”--Eavan Boland, author of A Woman Without A Country (poems)

"This unique contribution fills a gap in our understanding of the Afghan people, their history and society. It is a must read."—Nancy Hatch Dupree, Afghanistan Centre at Kabul University

A groundbreaking collection of poetry by eight contemporary Afghan women poets in English translation en face with the original Persian Dari text. These poets live in Herat, the ancient epicenter of literature and the arts.

Frazana Marie is a Ph.D. candidate in Middle Eastern literature at the University of Arizona. She served as an active duty officer for over six years including two years of deployed service in Afghanistan. She is president of Civil Vision International, a nonprofit focusing on influencing international relationships.

Farzana Marie is PhD candidate in Middle Eastern Literatures at the University of Arizona's School of Middle Eastern and North African Studies. Her research focuses on Persian literature, especially Afghan women's poetry. She also writes and translates poetry. She holds a B.S. in the Humanities from the U.S. Air Force Academy and an M.A. in English from the University of Massachusetts, Boston. She served as an active duty officer for over six years, including two consecutive years of deployed service in Afghanistan (2010-2012), where she previously served as a volunteer teacher in Afghanistan orphanages (2003-2004). Farzana is the President of Civil Vision International, a non-profit charitable organization focused on positively influencing international relationships through connecting, informing, educating and inspiring citizens.