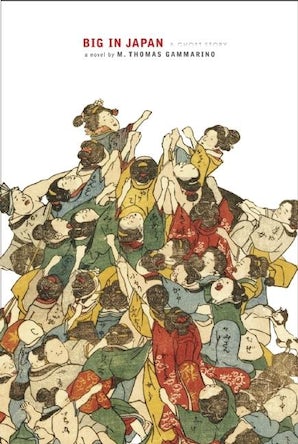 “From Susie Wong to Madame Butterfly to Miss Saigon: you might think that we've had enough of American men adventuring, scoring, and coming undone in the Far East. But you'd be wrong. Gammarino's Big in Japan is a shrewd and lively book, sharp-eyed and unsparing in its account of a young American's good and very bad moments overseas. The writing is wired and the ultimate judgement is merciless. It's seductive and it's devastating.” —PF Kluge, author of Eddie and the Cruisers and Gone Tomorrow

While playing to lackluster crowds in their hometown of Philadelphia, progressive rock band Agenbite clings to the comforting half-truth that they're doing better in Japan. When their manager agrees to send them over on a shoestring tour, though, they're swiftly forced to give up their illusions and return stateside.

All but one of them, that is.

Brain Tedesco, the band's obsessive-compulsive nerve center, has fallen in love with a part-time sex worker - the first woman ever to have touched him - and his illusions have only just begun. What ensues is a gritty coming-of-age tale in which Brain, intent on achieving some kind of transcendence, paradoxically (or not so paradoxically) descends into the Hungry Ghost realm of Tokyo’s underworld. He becomes, in effect, a gaki - the insatiable creature of Buddhist cosmology - and must learn how to live even as his outsize desires threaten to engulf him.