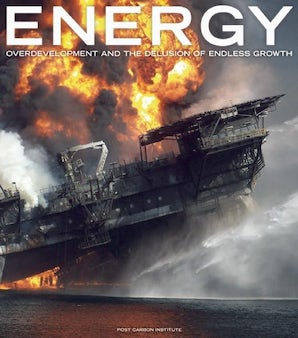 Overdevelopment and the Delusion of Endless Growth

ENERGY: Overdevelopment and the Delusion of Endless Growth takes an unflinching look at the environmental devastation created by our thirst for energyincluding supposedly clean” renewable sources. From oil spills, nuclear accidents, and mountaintop-removal coal mining to oversized wind farms and desert-destroying solar power plants, virtually every region of the globe is now experiencing the consequences of out-of-control energy development. Essentially no place is sacred, no landscape safe from the relentless search for energy resources to continue powering a culture based on perpetual growth. Precious wildlands, fragile ecosystems, even our own communities and children’s health are at risk.

In a large-format, photo-driven narrative (including 195 color photos), ENERGY features the writings of more than thirty leading thinkers on energy, society, and ecology. Collectively, they lift the veil on the harsh realities of our pursuit of energy at any price, revealing the true costs, benefits, and limitations of all our energy options. Ultimately, the book offers not only a deep critique of the current system that is toxic to nature and people but a hopeful vision for a future energy economyin which resilience, health, beauty, biodiversity, and durability, not incessant growth, are the organizing principles.

Tom Butler is the editorial projects director for the Foundation for Deep Ecology and president of the Northeast Wilderness Trust. A Vermont-based conservation activist and writer, his books include Wild Earth, Plundering Appalachia, and Wildlands Philanthropy, an award-winning celebration of parks and nature preserves established through private initiative.

George Wuerthner is a photographer, author, and activist who has published more than 30 books on America’s wild places, including Wildfire: A Century of Failed Forest Policy and Thrillcraft: The Environmental Consequences of Motorized Recreation. He has served on the boards of several regional & national organizations.

Richard Heinberg is widely regarded as one of the world's most effective communicators of the urgent need to transition away from fossil fuels. He is the author of nine books, including The Party's Over: Oil, War and the Fate of Industrial Societies, Powerdown: Options and Actions for a Post-Carbon World, and Blackout: Coal, Climate and the Last Energy Crisis. He has authored scores of essays and articles, is featured in many documentaries, and has appeared on numerous television and radio programs. Heinberg is Senior Fellow-in-Residence at Post Carbon Institute.