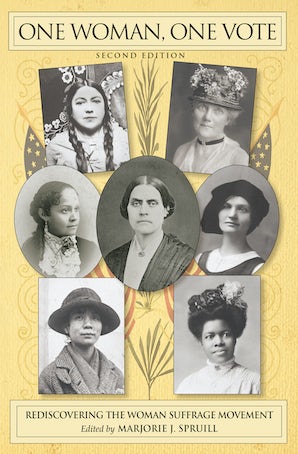 One Woman, One Vote

Includes definitive writings by leading scholars that cover the full scope of the woman suffrage movement in the U.S., up to and including the outcome of the 2020 presidential election. This revised and expanded edition offers new material on the international influences for suffrage, race and racism, and regional issues that affected the suffrage movement and the struggles many women faced trying to vote — even after ratification of the Nineteenth Amendment in 1920.

One Woman, One Vote was first published by NewSage Press in 1975 and is the companion book to the PBS American Experience documentary by the same name. This book continues to be the most comprehensive collection of writings — contemporary and historical — on the woman suffrage movement in America. The PBS documentary, produced by the Educational Film Center, has also been updated with an intro by Ruth Bader Ginsburg, for the 100th anniversary of the 19th Amendment.

The 23 essays in the Second Edition focus on aspects of the suffrage movement in greater depth with an extensive opening chapter on the overall suffrage movement, "How Woman Won." Many of these prominent contemporary scholars challenge widely accepted traditional theories and illustrate the diversity and complexity of the fight for the Nineteenth Amendment. Together, they tell the fascinating story of woman's suffrage from the failure of the Constitution to enfranchise women to the political engagement of women after 1920.

The authors of the essays are scholars in the fields of History, American Studies, Political Science, and Sociology, and they help readers “rediscover” the suffrage movement through their engaging writing, offering intriguing and often contradictory interpretations of historical accounts.

The editor, Marjorie J. Spruill, Ph.D., is a leading authority in women’s and Southern history, and has authored numerous books and essays related to woman suffrage and women's fight for equality. She speaks internationally on these topics and is well respected among historians. Her most recent book, Divided We Stand: The Battle Over Women's Rights and Family Values That Polarized American Politics has been praised in numerous reviews, including "The New York Times," "The New Yorker," "The Nation," and more.

New material includes an insightful essay by Spruill on racism in the movement, “The Inhospitable South and the Struggle for Woman Suffrage.” She describes the long and often frustrating effort beginning in the 1890s by northern and southern suffragists to bring the Southern states into the movement—an effort thwarted by widespread ideas about white supremacy and states' rights among white Southerners who viewed the movement as an unwelcome offshoot of the antislavery movement.

Readers of One Woman, One Vote learn how the suffrage movement—from its beginning in 1848 to its conclusion in 1920, and beyond—changed over time in response to changes in American society and politics. In the Second Edition, two new chapters expand on international suffrage efforts as they relate to the U.S.

Readers also learn of the growing diversity of the suffrage constituency in terms of region, religion, race, class, ethnicity, and even attitude, and that the suffrage story included both a record of harmony and cooperation but also discrimination and betrayal. For many women of color the struggle to get the vote did not end in 1920, but continued for the next 100 years—and continues today.

Above all, Spruill emphasizes that the vote was not “given” to women when the Nineteenth Amendment was ratified in 1920: generations of suffragists labored long and hard to win the right to vote in the United States.