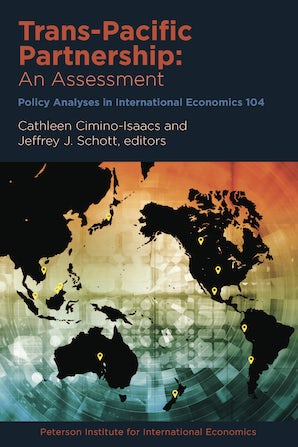 The Trans-Pacific Partnership (TPP) between 12 Pacific Rim countries has generated the most intensive political debate about the role of trade in the United States in a generation. The TPP is one of the broadest and most progressive free trade agreements since the North American Free Trade Agreement (NAFTA). The essays in this Policy Analysis provide estimates of the TPP's benefits and costs and analyze more than 20 issues in the agreement, including environmental and labor standards, tariff schedules, investment and competition policy, intellectual property, ecommerce, services and financial services, government procurement, dispute settlement, and agriculture. Through extensive analysis of the TPP text, PIIE scholars present an indispensable and detailed "reader's guide" that also sheds light on the agreement's merits and shortcomings.

Cathleen Cimino-Isaacs, research associate, has been with the Peterson Institute since August 2012. She works with senior fellows Gary Clyde Hufbauer and Jeffrey J. Schott on economic issues relating to international trade policy, free trade agreement negotiations, and the future of the World Trade Organization. She is coauthor of Local Content Requirements: A Global Problem (2013) and assisted with Economic Normalization with Cuba: A Roadmap for US Policymakers (2014).

Jeffrey J. Schott joined the Peterson Institute for International Economics in 1983 and is a senior fellow working on international trade policy and economic sanctions. During his tenure at the Institute, Schott was also a visiting lecturer at Princeton University (1994) and an adjunct professor at Georgetown University (1986–88). He was a senior associate at the Carnegie Endowment for International Peace (1982–83) and an official of the US Treasury Department (1974–82) in international trade and energy policy. During the Tokyo Round of multilateral trade negotiations, he was a member of the US delegation that negotiated the GATT Subsidies Code. Since January 2003, he has been a member of the Trade and Environment Policy Advisory Committee of the US government. He is also a member of the State Department's Advisory Committee on International Economic Policy.