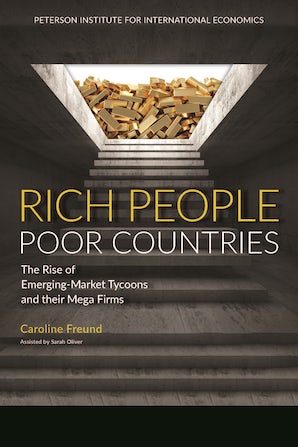 The Rise of Emerging-Market Tycoons and Their Mega Firms

By Caroline Freund With Sarah Oliver

Like the robber barons of the 19th century Gilded Age, a new and proliferating crop of billionaires is driving rapid development and industrialization in poor countries. The accelerated industrial growth spurs economic prosperity for some, but it also widens the gap between the super rich and the rest of the population, especially the very poor.

In Rich People Poor Countries, Caroline Freund identifies and analyzes nearly 700 emerging-market billionaires whose net worth adds up to more than $2 trillion. Freund finds that these titans of industry are propelling poor countries out of their small-scale production and agricultural past and into a future of multinational industry and service-based mega firms. And more often than not, the new billionaires are using their newfound acumen to navigate the globalized economy, without necessarily relying on political connections, inheritance, or privileged access to resources. This story of emerging-market billionaires and the global businesses they create dramatically illuminates the process of industrialization in the modern world economy.

Sarah Oliver has been a research analyst at the Peterson Institute for International Economics since August 2013.