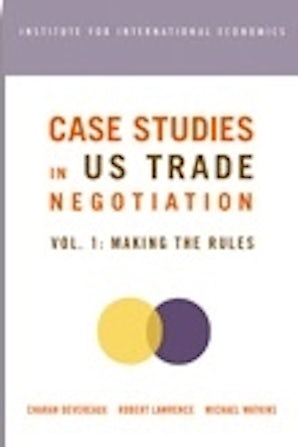 Case Studies in US Trade Negotiation

Trade policy has moved from the wings onto center stage. Between 1992 and 2000, US exports rose by 55 percent. By the year 2000, trade summed to 26 percent of US GDP, and the United States imported almost two-thirds of its oil and was the world's largest host country for foreign investors. America's interest in a more open and prosperous foreign market is now squarely economic. This volume presents cases on five important trade negotiations, all focused on "making the rules," or the process of establishing how the trade system would operate. The cases not only explore the changing substance of trade agreements but also delve into the negotiation process. They explore not just the what of trade, but the who, how, and why of decision-making. By examining some of the most important recent negotiations, the reader can come to understand not just the larger issues surrounding trade, but how players seek to exert influence and how the system is evolving on a day-to-day basis. This book presents a coherent description of the facts that will allow for discussion and independent conclusions about policies, politics, and processes.

Robert Z. Lawrence was a senior fellow and also the Albert L. Williams Professor of Trade and Investment at the John F. Kennedy School of Government at Harvard University. He served as a member of President Clinton's Council of Economic Advisers from 1999 to 2000.

Charan Devereaux is a senior researcher at the John F. Kennedy School of Government's Trade and Negotiations Program and the Harvard Law School Program on Negotiation, where she writes on international trade issues.

Michael D. Watkins is a professor of practice in organizational behavior at INSEAD, Fontainebleau. He is also founding partner of Genesis Advisers, a leadership strategy consultancy. He is the author of The First 90 Days: Critical Success Strategies for New Leaders at all Levels (2003) and Breakthrough Business Negotiation: A Toolbox for Managers (Jossey-Bass, winner of the CPR Institute prize for best negotiation book in 2002).