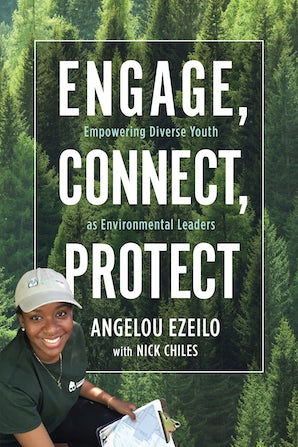 By Angelou Ezeilo With Nick Chiles

Building environmental strength through a diversity of youth

Revealing the deep and abiding interest that African American, Latino, and Native American communities—many of whom live in degraded and polluted parts of the country—have in our collective environment, Engage, Connect, Protect is part eye-opening critique of the cultural divide in environmentalism, part biography of a leading social entrepreneur, and part practical toolkit for engaging diverse youth. It covers:

Engage, Connect, Protect is a wake-up call for businesses, activists, educators, and policymakers to recognize the work of grassroots activists in diverse communities and create opportunities for engaging with diverse youth as the next generation of environmental stewards, while the concern about the state of our land, air, and water continues to grow.

Angelou Ezeilo is founder and CEO of the Greening Youth Foundation. A leading social entrepreneur, she was a 2016 Ashoka Fellow, is a member of the National Center for Civil and Human Rights’ Women in Solidarity Society and is on the boards of the Atlanta Audubon Society and the South Fork Conservancy. She is also an advisory Board Member for the Arabia Mountain National Heritage Area and Outdoor Afro, and she is on the Steering Committee for the new Children’s Wellbeing Initiative — a network of 22 changemakers working together to promote children’s wellbeing across the country. She splits her time between the city of Atlanta, GA and Victoria Island, Nigeria, with her husband and partner. www.gyfoundation.org

Nick Chiles is one of the nation’s foremost chroniclers of African American life, culture, and celebrity. He is the author or co-author of 14 books, including three New York Times bestsellers he wrote with R&B icon Bobby Brown, civil rights leader Rev. Al Sharpton, and gospel legend Kirk Franklin. Chiles, a graduate of Yale, served as a newspaper reporter, magazine writer, and magazine and website editor-in-chief during his years in journalism, winning nearly 20 major awards, including a 1992 Pulitzer Prize as part of a New York Newsday team. He is also a college professor of journalism. He lives in Atlanta, GA.