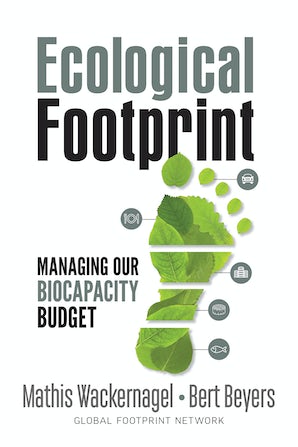 By Mathis Wackernagel and Bert Beyers Translated by Katharina Rout

Ecological Footprint accounting, first introduced in the 1990s and continuously developed, continues to be the only metric that compares overall human demand on nature with what our planet can renew — its biocapacity — and distils this into one number: how many Earths we use.

Our economy is running a Bernie Madoff-style Ponzi scheme with the planet. We use future resources to run the present, using more than Earth can replenish. Like any such scheme, this works for a limited time, followed by a crash.

Whether you’re a student, business leader, future-oriented city planner, economist, or have an abiding interest in humanity’s future, Footprint and biocapacity are key parameters to be reckoned with and Ecological Footprint is your essential guide.

Mathis Wackernagel, born in Basel, Switzerland, is co-creator of the Ecological Footprint and president of Global Footprint Network, which was named one of the World’s 100 Top NGOs by The Global Journal. Wackernagel has worked on sustainability with governments, corporations, and international NGOs on six continents, and has lectured at more than a hundred universities. He previously served as the director of the Sustainability Program at Redefining Progress in California and ran the Centro de Estudios para la Sustentabilidad at Anáhuac University in Mexico. Wackernagel has authored or contributed to over one hundred peer-reviewed papers, numerous articles and reports, and various books on sustainability including the bestselling Our Ecological Footprint. With dozens of international awards and accolades for his pioneering work, he has been identified as a leader who is driving the world’s most significant problems to zero. He lives in Oakland, CA. www.footprintnetwork.org

Bert Beyers, born in Mönchengladbach, Germany, is a senior editor at the Norddeutscher Rundfunk in Hamburg. For several decades, questions of ecology and future have been his professional passion. He has published widely including a book with Franz Josef Radermacher on survival in the 21st century entitled Welt mit Zukunft: Die ökozoziale Perspektive. He lives in Hamburg, Germany.