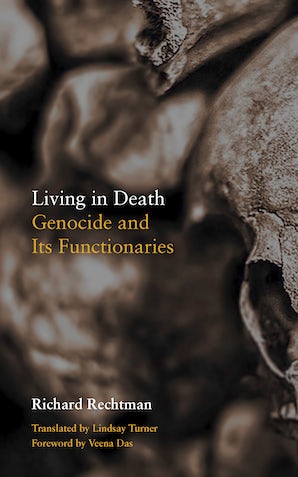 Genocide and Its Functionaries

Winner, French Voices Award for Excellence in Publication and Translation

When we speak of mass killers, we may speak of radicalized ideologues, mediocrities who only obey orders, or bloodthirsty monsters. Who are these men who kill on a mass scale? What is their consciousness? Do they not feel horror or compassion?

Richard Rechtman’s Living in Death offers new answers to a question that has haunted us at least since the Holocaust. For Rechtman, it is not ideologies that kill, but people. This book descends into the ordinary life of people who execute hundreds every day, the same way others go to the office. Bringing philosophical sophistication to the ordinary, the book constitutes an anthropology of mass killers.

Turning away from existing psychological and philosophical accounts of genocide’s perpetrators, Rechtman instead explores the conditions under which administering death becomes a job like any other. Considering Cambodia, Rwanda, and other mass killings, Living in Death draws on a vast array of archival research, psychological theory, and anecdotes from the author’s clinical work with refugees and former participants in genocide. Rechtman mounts a compelling case for reframing and refocusing our attempts to explain—and preempt—acts of mass torture, rape, killing, and extermination.

What we must see, Rechtman argues, is that for genocidaires (those who carry out acts that are or approach genocide), there is nothing extraordinary, unusual, or world-historical about their actions. On the contrary, they are preoccupied with the same mundane things that characterize any other job: interactions with colleagues, living conditions, a drink and a laugh at the end of the day. To understand this is to understand how things came to be the way they are—and how they might be different.

Richard Rechtman (Author)
Richard Rechtman is an anthropologist and psychiatrist and director of studies at EHESS in Paris. Since 1990, he has directed a transcultural outpatient clinic for refugees in central Paris. He is the author of several books in French and coauthor, with Didier Fassin, of The Empire of Trauma: An Inquiry into the Condition of Victimhood (2009), which won the William A. Douglass Book Prize.

Veena Das (Foreword By)
Veena Das is Krieger-Eisenhower Professor of Anthropology at the Johns Hopkins University.

Lindsay Turner (Translator)
Lindsay Turner, a poet and translator, is Assistant Professor of English and Literary Arts at the University of Denver. She has translated books by Stéphane Bouquet, Souleymane Bachir Diagne, Anne Dufourmantelle, Frédéric Neyrat, and Ryoko Sekiguchi.