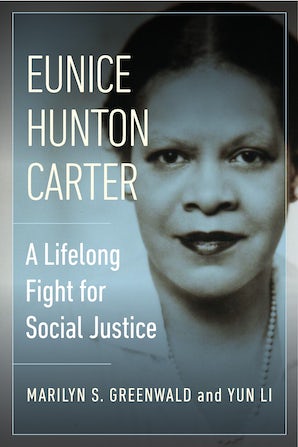 A Lifelong Fight for Social Justice

By Marilyn Greenwald and Yun Li

The fascinating biography of Eunice Hunton Carter, a social justice and civil rights trailblazer and the only woman prosecutor on the Luciano trial

Eunice Hunton Carter rose to public prominence in 1936 as both the only woman and the only person of color on Thomas Dewey’s famous gangbuster team that prosecuted mobster Lucky Luciano. But her life before and after the trial remains relatively unknown. In this definitive biography on this trailblazing social justice activist, authors Marilyn S. Greenwald and Yun Li tell the story of this unknown but critical pioneer in the struggle for racial and gender equality in the twentieth century.

Carter worked harder than most men because of her race and gender, and Greenwald and Li reflect on her lifelong commitment to her adopted home of Harlem, where she was viewed as a role model, arts patron, community organizer, and, later, as a legal advisor to the United Nations, the National Council of Negro Women, and several other national and global organizations.

Carter was both a witness to and a participant in many pivotal events of the early and mid– twentieth century, including the Harlem riot of 1935 and the social scene during the Harlem Renaissance.

Using transcripts, letters, and other primary and secondary sources from several archives in the United States and Canada, the authors paint a colorful portrait of how Eunice continued the legacy of the Carter family, which valued education, perseverance, and hard work: a grandfather who was a slave who bought his freedom and became a successful businessman in a small colony of former slaves in Ontario, Canada; a father who nearly single-handedly integrated the nation’s YMCAs in the Jim Crow South; and a mother who provided aid to Black soldiers in France during World War I and who became a leader in several global and domestic racial equality causes.

Carter’s inspirational multi-decade career working in an environment of bias, segregation, and patriarchy in Depression-era America helped pave the way for those who came after her.

Marilyn Greenwald (Author)
Marilyn Greenwald is a professor emerita in the E. W. Scripps School of Journalism at Ohio University. Her teaching and research interests include biography writing, news reporting, and reviewing the arts. She is the author of Pauline Frederick Reporting: A Pioneering Broadcaster Covers the Cold War (Potomac, 2015) and A Woman of the Times: Journalism, Feminism, and the Career of Charlotte Curtis (Ohio University Press, 1999), which was a notable book of the New York Times.

Yun Li (Author)
Yun Li is a reporter at CNBC covering the US financial markets. Her work has appeared in Reuters, Bloomberg News, and other outlets. She holds a master’s degree in journalism from the E. W. Scripps School of Journalism at Ohio University.