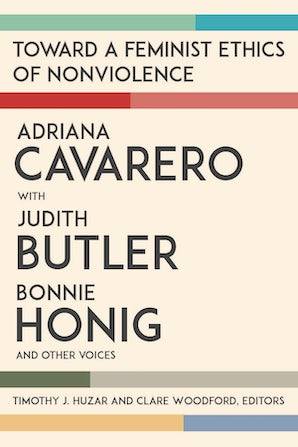 Toward a Feminist Ethics of Nonviolence

Toward a Feminist Ethics of Nonviolence brings together major feminist thinkers to debate Cavarero’s call for a postural ethics of nonviolence and a sociality rooted in bodily interdependence.

Toward a Feminist Ethics of Nonviolence brings together three major feminist thinkers—Adriana Cavarero, Judith Butler, and Bonnie Honig—to debate Cavarero’s call for a postural ethics of nonviolence. The book consists of three longer essays by Cavarero, Butler, and Honig, followed by shorter responses by a range of scholars that widen the dialogue, drawing on post-Marxism, Italian feminism, queer theory, and lesbian and gay politics. Together, the authors contest the boundaries of their common project for a pluralistic, heterogeneous, but urgent feminist ethics of nonviolence.

Adriana Cavarero (Author)
Adriana Cavarero is Professor of Political Philosophy at the University of Verona. Her most recent book is Inclinations: A Critique of Rectitude.

Judith Butler (Author)
Judith Butler is Maxine Elliot Professor in the Department of Comparative Literature and the Program of Critical Theory at the University of California, Berkeley. Their many books include The Force of Nonviolence, Giving an Account of Oneself, and Gender Trouble.

Bonnie Honig (Author)
Bonnie Honig is Nancy Duke Lewis Professor of Modern Culture and Media (MCM) and Political Science at Brown University. Her most recent books are Public Things: Democracy in Disrepair and A Feminist Theory of Refusal.

Clare Woodford (Edited By)
Clare Woodford is Director of the Critical Theory strand of the Centre for Applied Philosophy, Politics, and Ethics at the University of Brighton. She is the author of Disorienting Democracy: Politics of Emancipation.