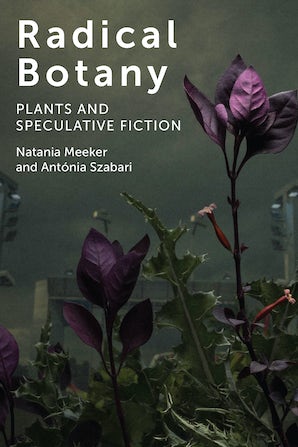 By Natania Meeker and Antónia Szabari

Radical Botany excavates a tradition in which plants participate in the effort to imagine new worlds and envision new futures. Modernity, the book claims, is defined by the idea of all life as vegetal. Meeker and Szabari argue that the recognition of plants’ liveliness and animation, as a result of scientific discoveries from the seventeenth century to today, has mobilized speculative creation in fiction, cinema, and art.

Plants complement and challenge notions of human life. Radical Botany traces the implications of the speculative mobilization of plants for feminism, queer studies, and posthumanist thought. If, as Michael Foucault has argued, the notion of the human was born at a particular historical moment and is now nearing its end, Radical Botany reveals that this origin and endpoint are deeply informed by vegetality as a form of pre- and posthuman subjectivity.

The trajectory of speculative fiction which this book traces offers insights into the human relationship to animate matter and the technological mediations through which we enter into contact with the material world. Plants profoundly shape human experience, from early modern absolutist societies to late capitalism’s manipulations of life and the onset of climate change and attendant mass extinction.

A major intervention in critical plant studies, Radical Botany reveals the centuries-long history by which science and the arts have combined to posit plants as the model for all animate life and thereby envision a different future for the cosmos.

Natania Meeker (Author)
Natania Meeker is an associate professor of French and comparative literature at the University of Southern California. She published Voluptuous Philosophy: Literary Materialism in the French Enlightenment with Fordham University Press in 2006. Her research and teaching interests include animated and animating plants, vegetal ontologies, plant art and media, materialisms old and new, feminist theory and thought, and the Enlightenment, broadly conceived. She was named Chevalier de l’Ordre des Palmes Académiques in 2017.

Antónia Szabari (Author)
Antónia Szabari is an associate professor of French and comparative literature at the University of Southern California. Her scholarly interests include early modern literature and political thought, plant studies, history of botany, and speculative fiction. She is the author of Less Rightly Said: Scandals and Readers in Sixteenth-Century France (Stanford University Press, 2009).