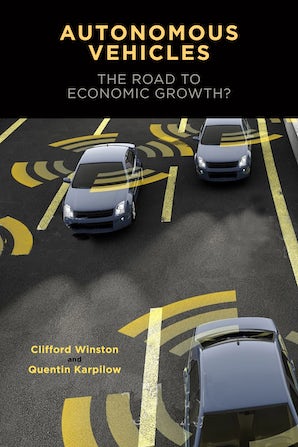 The Road to Economic Growth?

By Clifford Winston and Quentin Karpilow

Better public policies can make the road smoother for self-driving vehicles and the society that soon will depend on them.

Whether you find the idea of autonomous vehicles to be exciting or frightening, the truth is that they will soon become a significant everyday presence on streets and highwaysnot just a novel experiment attracting attention or giggles and sparking fears of runaway self-driving cars.

The emergence of these vehicles represents a watershed moment in the history of transportation. If properly encouraged, this innovation promises not only to vastly improve road travel and generate huge benefits to travelers and businesses, but to also benefit the entire economy by reducing congestion and virtually eliminating vehicle accidents. The impacts of autonomous vehicles on land use, employment, and public finance are likely to be mixed. But widely assumed negative effects are generally overstated because they ignore plausible adjustments by the public and policymakers that could ameliorate them.

This book by two transportation experts argues that policy analysts can play an important and constructive role in identifying and analyzing important policy issues and necessary steps to ease the advent of autonomous vehicles. Among the actions that governments must take are creating a framework for vehicle testing, making appropriate investments in the technology of highway networks to facilitate communication involving autonomous vehicles, and reforming pricing and investment policies to enable operation of autonomous vehicles to be safe and efficient.

The authors argue that policymakers at all levels of government must address these and other issues sooner rather than later. Prompt and effective actions outlined in this book are necessary to ensure that autonomous vehicles will be safe and efficient when the public begins to adopt them as replacements for current vehicles.

Clifford Winston, the Searle Freedom Trust Senior Fellow in the Brookings Institution’s Economic Studies program, has been with Brookings since 1984. He is an applied microeconomist who specializes in the analysis of industrial organization, regulation, and transportation.

Winston has also been co-editor of the annual microeconomics edition of Brookings Papers on Economic Activity. Prior to his fellowship at Brookings, he was an Associate Professor in the Transportation Systems Division of the Massachusetts Institute of Technology's Department of Civil Engineering. He is the author of numerous books on economics and public policy.