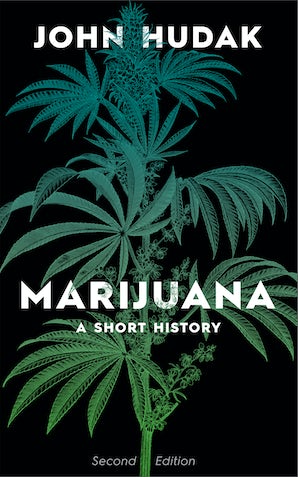 From Reefer Madness to legal purchase at the corner store

With long-time legal and social barriers to marijuana falling across much of the United States, the time has come for an accessible and informative look at attitudes toward the dried byproduct of Cannabis sativa. Marijuana: A Short History profiles the politics and policies concerning the five-leaf plant in the United States and around the world.

Millions of Americans have used marijuana at some point in their lives, yet it remains a substance shrouded by myth, misinformation, and mystery. And nearly a century of prohibition has created an enforcement system that is racist, and the continuing effects of racially-targeted over criminalization limit economic and social opportunities in communities of color. Marijuana: A Short History tells this story, and that of states stepping up to enact change. This book offers an up-to-date, cutting-edge look at how a plant with a tumultuous history has emerged from the shadows of counterculture and illegality. Today, marijuana has become a remarkable social, economic, and even political forcewith a surprising range of advocates and opponents.

Over the past two decades marijuana policy has transformed dramatically in the United States, as dozens of states have openly defied the federal government. Marijuana: A Short History provides a brief yet compelling narrative that discusses the social and cultural history of marijuana but also tells us how a once-vilified plant has been transformed into a serious, even mainstream, public policy issue. Focusing on politics, the media, government, racism, criminal justice, and education, the book describes why public policy has changed, and what that change might mean for marijuana’s future place in society.

John Hudak is deputy director of the Center for Effective Public Management and a senior fellow in Governance Studies at the Brookings Institution. He is also author of Presidential Pork: White House Influence over the Distribution of Federal Grants (Brookings).