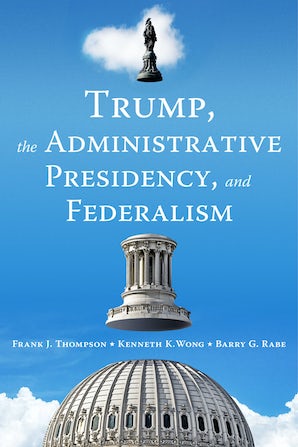 Trump, the Administrative Presidency, and Federalism

How Trump has used the federal government to promote conservative policies

The presidency of Donald Trump has been unique in many respectsmost obviously his flamboyant personal style and disregard for conventional niceties and factual information. But one area hasn’t received as much attention as it deserves: Trump’s use of the administrative presidency, including executive orders and regulatory changes, to reverse the policies of his predecessor and advance positions that lack widespread support in Congress.

This book analyzes the dynamics and unique qualities of Trump’s administrative presidency in the important policy areas of health care, education, and climate change. In each of these spheres, the arrival of the Trump administration represented a hostile takeover in which White House policy goals departed sharply from the more liberal ideologies and objectives of key agencies, which had been embraced by the Obama administration.

Three expert authors show how Trump has continued, and even expanded, the rise of executive branch power since the Reagan years. The authors intertwine this focus with an in-depth examination of how the Trump administration’s hostile takeover has drastically changed key federal policiesand reshaped who gets what from governmentin the areas of health care, education, and climate change.

Readers interested in the institutions of American democracy and the nation’s progress (or lack thereof) in dealing with pressing policy problems will find deep insights in this book. Of particular interest is the book’s examination of how the Trump administration’s actions have long-term implications for American democracy.

Frank J. Thompson is Board of Governors Distinguished Professor at the School of Public Affairs and Administration and the Center for State Health Policy at Rutgers University. He has published extensively on issues of health policy with particular attention to the impact of federalism. His most recent book is Medicaid Politics: Federalism, Policy Durability, and Health Reform. He is a Fellow of the National Academy of Public Administration.

Kenneth K. Wong is the Annenberg Professor of Educational Policy, Director of Urban Education Policy Program, and Professor of Political Science, Public Policy, and Urban Studies at Brown University. He has published several books on education policy, governance, and accountability, including The Education Mayor and Funding Public Schools: Politics and Policy.

Barry G. Rabe is the J. Ira and Nicki Harris Family Professor of Public Policy at the Gerald R. Ford School of Public Policy at the University of Michigan. He has received four research awards from the American Political Science Association and has published widely in the areas of environmental policy and federalism. Recent books include Can We Price Carbon?, Greenhouse Governance, and Statehouse and Greenhouse.