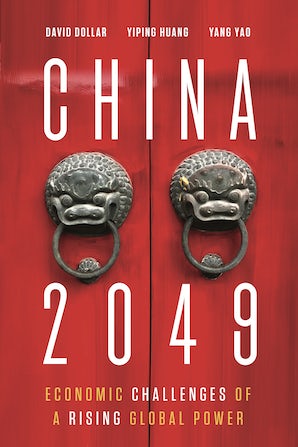 How will China reform its economy as it aspires to become the next economic superpower?

It’s clear that China is the world’s next economic superpower. But what isn’t so clear is how China will get there by the middle of this century. It now faces tremendous challenges such as fostering innovation, dealing with ageing problem and coping with a less accommodative global environment.

In this book, economists from China’s leading university and America’s best-known think tank offer in depth analyses of these challenges. Does China have enough talent and right policy and institutional mix to transit from input-driven to innovation-driven economy? What does ageing mean, in terms of labor supply, consumption demand and social welfare expenditure? Can China contain the environmental and climate change risks? How should the financial system be transformed in order to continuously support economic growth and keep financial risks under control? What fiscal reforms are required in order to balance between economic efficiency and social harmony? What roles should the state-owned enterprises play in the future Chinese economy? In addition, how will technological competition between the United States and China affect each country’s development? Will the Chinese yuan emerge as a major reserve currency, and would this destabilize the international financial system? What will be China’s role in the international economic institutions? And will the United States and other established powers accept a growing role for China and the rest of the developing world in the governance of global institutions such as the World Trade Organization and the International Monetary Fund, or will the world devolve into competing blocs?

This book provides unique insights into independent analyses and policy recommendations by a group of top Chinese and American scholars. Whether China succeeds or fails in economic reform will have a large impact, not just on China’s development, but also on stability and prosperity for the whole world.

David Dollar is a senior fellow in the China Center at the Brookings Institution. Previously he was U.S. Treasury's economic and financial emissary to China and World Bank Country Director for China.

Yiping Huang is Jinguang Chair Professor of Economics and Finance at the National School of Development, and Director of the Institute of Digital Finance, Peking University. He was a former member of the People’s Bank of China’s Monetary Policy Committee. His current research interests include financial reform and fintech.

Yang Yao is a Cheung-Kong Scholar and Boya Chair professor at the China Center for Economic Research (CCER) and the National School of Development (NSD), Peking University. He currently serves as the director of CCER, and the dean of NSD. His research interests include economic transition and development in China.