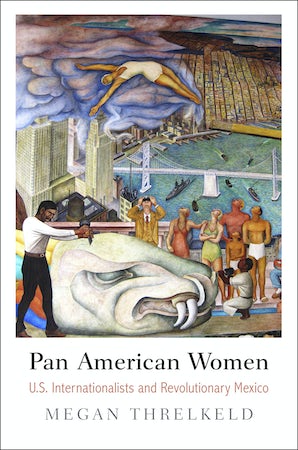 Politics and Culture in Modern America

In the years following World War I, women activists in the United States and Europe saw themselves as leaders of a globalizing movement to promote women's rights and international peace. In hopes of advancing alliances, U.S. internationalists such as Jane Addams, Carrie Chapman Catt, and Doris Stevens reached across the border to their colleagues in Mexico, including educator Margarita Robles de Mendoza and feminist Hermila Galindo. They established new organizations, sponsored conferences, and rallied for peaceful relations between the two countries. But diplomatic tensions and the ongoing Mexican Revolution complicated their efforts.

In Pan American Women, Megan Threlkeld chronicles the clash of political ideologies between U.S. and Mexican women during an era of war and revolution. Promoting a "human internationalism" (in the words of Addams), U.S. women overestimated the universal acceptance of their ideas. They considered nationalism an ethos to be overcome, while the revolutionary spirit of Mexico inspired female citizens there to embrace ideas and reforms that focused on their homeland. Although U.S. women gradually became less imperialistic in their outlook and more sophisticated in their organizational efforts, they could not overcome the deep divide between their own vision of international cooperation and Mexican women's nationalist aspirations.

Pan American Women exposes the tensions of imperialism, revolutionary nationalism, and internationalism that challenged women's efforts to build an inter-American movement for peace and equality, in the process demonstrating the importance of viewing women's political history through a wider geographic lens.

Megan Threlkeld is Associate Professor of History at Denison University.