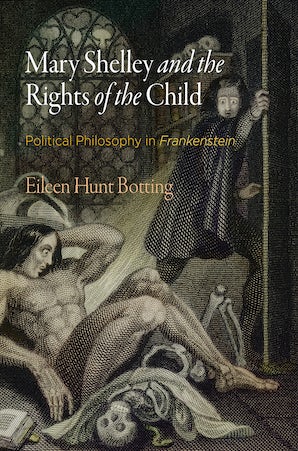 Mary Shelley and the Rights of the Child

From her youth, Mary Shelley immersed herself in the social contract tradition, particularly the educational and political theories of John Locke and Jean-Jacques Rousseau, as well as the radical philosophies of her parents, the feminist Mary Wollstonecraft and the anarchist William Godwin. Against this background, Shelley wrote Frankenstein; or, the Modern Prometheus, first published in 1818. In the two centuries since, her masterpiece has been celebrated as a Gothic classic and its symbolic resonance has driven the global success of its publication, translation, and adaptation in theater, film, art, and literature. However, in Mary Shelley and the Rights of the Child, Eileen Hunt Botting argues that Frankenstein is more than an original and paradigmatic work of science fiction—it is a profound reflection on a radical moral and political question: do children have rights?

Botting contends that Frankenstein invites its readers to reason through the ethical consequences of a counterfactual premise: what if a man had used science to create a human life without a woman? Immediately after the Creature's "birth," his scientist-father abandons him and the unjust and tragic consequences that follow form the basis of Frankenstein's plot. Botting finds in the novel's narrative structure a series of interconnected thought experiments that reveal how Shelley viewed Frankenstein's Creature for what he really was—a stateless orphan abandoned by family, abused by society, and ignored by law. The novel, therefore, compels readers to consider whether children have the right to the fundamental means for their development as humans—namely, rights to food, clothing, shelter, care, love, education, and community.

In Botting's analysis, Frankenstein emerges as a conceptual resource for exploring the rights of children today, especially those who are disabled, stateless, or genetically modified by medical technologies such as three-parent in vitro fertilization and, perhaps in the near future, gene editing. Mary Shelley and the Rights of the Child concludes that the right to share love and community, especially with parents or fitting substitutes, belongs to all children, regardless of their genesis, membership, or social status.

Eileen Hunt Botting is Professor of Political Science at the University of Notre Dame and author of Wollstonecraft, Mill, and Women's Human Rights and Family Feuds: Wollstonecraft, Burke, and Rousseau on the Transformation of the Family.