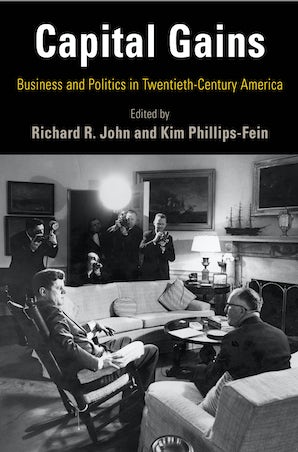 Business and Politics in Twentieth-Century America

Hagley Perspectives on Business and Culture

Recent events—the Citizens United Supreme Court decision, the Occupy Wall Street movement, and efforts to increase the minimum wage, among others—have driven a tremendous surge of interest in the political power of business. Capital Gains collects some of the most innovative new work in the field. The chapters explore the influence of business on American politics in the twentieth century at the federal, state, and municipal levels. From corporate spending on city governments in the 1920s to business support for public universities in the postwar period, and from business opposition to the Vietnam War to the corporate embrace of civil rights, the contributors reveal an often surprising portrait of the nation's economic elite.

Contrary to popular mythology, business leaders have not always been libertarian or rigidly devoted to market fundamentalism. Before, during, and after the New Deal, important parts of the business world sought instead to try to shape what the state could accomplish and to make sure that government grew in ways that were favorable to them. Appealing to historians working in the fields of business history, political history, and the history of capitalism, these essays highlight the causes, character, and consequences of business activism and underscore the centrality of business to any full understanding of the politics of the twentieth century—and today.

Richard R. John is Professor of History at Columbia University. Kim Phillips-Fein is Associate Professor in the Gallatin School of Individualized Study at New York University.