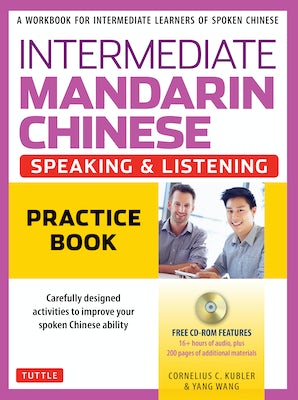 A Workbook for Intermediate Learners of Spoken Chinese (CD-Rom Included)

By Kubler,Cornelius C. and Yang Wang

This one-of-a-kind practice guide can be used with any Mandarin Chinese textbook or on its own to enhance your speaking and listening abilities dramatically!

No matter what textbook you're using to learn Chinese, it requires a lot of practice! Here is a wealth of practical activities and drills—plus over 16 hours of audio recordings—to help you improve your spoken Mandarin quickly and efficiently.

This book is interchangeable with its earlier edition, Intermediate Spoken Chinese Practice Essentials but works equally well with other coursebooks or on its own. The free disc contains hours of audio recording as well as printable PDF files providing hundreds of pages of extra practice exercises and activities.

This book includes hundreds of carefully designed activities to help you with every aspect of your Chinese language skills, including:The accompanying CD-ROM contains:

From 1980-1991 he was employed at the Foreign Service Institute, U.S. Department of State, where he served as Language Training Supervisor in Mandarin, Cantonese, Japanese, and Mongolian; as Principal of the advanced Chinese field school in Taiwan; and as Chair of the Department of Asian and African Languages.

Kubler, who is author or coauthor of 20 books and over 50 articles on Chinese language pedagogy and linguistics, frequently serves as reviewer or consultant for Chinese and Asian Studies programs in the U.S. and overseas. He has served as Chair of the Test Development Committee for the SAT Subject Test in Chinese and as member of the Executive Committee of the Association of Departments of Foreign Languages of the Modern Language Association. He is currently serving as American Co-Director of The Johns Hopkins University-Nanjing University Center for Chinese and American Studies in Nanjing, China.

Yang Wang, native to Beijing, is Senior Lecturer in Chinese at Brown University, where she teaches all levels of modern Chinese language. Before joining the Brown faculty, she taught Chinese at The Ohio State University and Williams College. She also taught for several years at the Middlebury College Summer Chinese School. Wang is interested in the implications of pragmatics in Chinese pedagogical practice, teaching materials development, and the integration of technology into the curriculum.