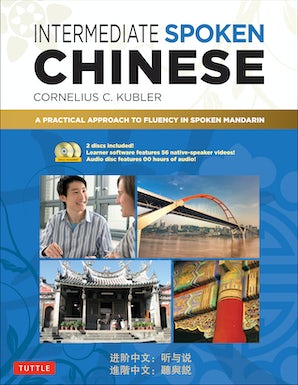 Welcome to the world's most efficient method of learning Mandarin Chinese, whether you are striving to learn Chinese on your own, or studying in a classroom setting.

Part of the widely-used and highly acclaimed Kubler series, Intermediate Spoken Chinese provides separate but integrated "tracks" to help you learn to read, write and speak Chinese efficiently, at your own pace. Some students and teachers wish to emphasize speaking ability first, whereas others want to focus on learning to read and write Chinese at the same time. These Chinese language study books allow you the flexibility to acquire the spoken language and the written language with the method that best fits your needs.

Intermediate Spoken Chinese allows you to experience real-life situations in different Mandarin-speaking locales. (It also exposes you to the authentic range of Chinese accents; you're not limited only to learning an imaginary "textbook Beijing accent" as in other books). Each of the everyday situations explored here—from shopping at a market to playing unexpected phone tag—is one you're likely to encounter as you interact with Chinese language speakers.

You can choose to use this book with its corresponding Intermediate Chinese Practice Essentials Workbook, available separately, that offers you a wide range of one-of-a-kind activities to help you practice the language skills you learn here.

Key features of Intermediate Spoken Chinese: Feel confident traveling in the Mandarin-speaking world; with this language learning set you will be speaking Chinese gracefully and fluidly in no time.

From 1980-1991 he was employed at the Foreign Service Institute, U.S. Department of State, where he served as Language Training Supervisor in Mandarin, Cantonese, Japanese, and Mongolian; as Principal of the advanced Chinese field school in Taiwan; and as Chair of the Department of Asian and African Languages.

Kubler, who is author or coauthor of 20 books and over 50 articles on Chinese language pedagogy and linguistics, frequently serves as reviewer or consultant for Chinese and Asian Studies programs in the U.S. and overseas. He has served as Chair of the Test Development Committee for the SAT Subject Test in Chinese and as member of the Executive Committee of the Association of Departments of Foreign Languages of the Modern Language Association. He is currently serving as American Co-Director of The Johns Hopkins University-Nanjing University Center for Chinese and American Studies in Nanjing, China.