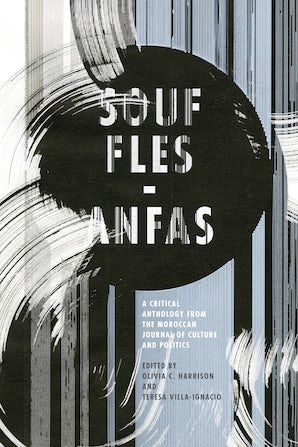 A Critical Anthology from the Moroccan Journal of Culture and Politics

Souffles-Anfas: A Critical Anthology from the Moroccan Journal of Culture and Politics introduces and makes available, for the first time in English, an incandescent corpus of experimental leftist writing from North Africa. Founded in 1966 by Abdellatif Laâbi and a small group of avant-garde Moroccan poets and artists and banned in 1972, Souffles-Anfas was one of the most influential literary, cultural, and political reviews to emerge in postcolonial North Africa. An early forum for tricontinental postcolonial thought and writing, the journal published texts ranging from experimental poems, literary manifestos, and abstract art to political tracts, open letters, and interviews by contributors from the Maghreb, the Middle East, Africa, Europe, and the Americas. The essays, poems, and artwork included in this anthology—by the likes of Abdelkebir Khatibi, Tahar Ben Jelloun, Albert Memmi, Etel Adnan, Sembene Ousmane, René Depestre, and Mohamed Melehi—offer a unique window into the political and artistic imaginaries of writers and intellectuals from the Global South, and resonate with particular acuity in the wake of the Arab Spring. A critical introduction and section headnotes make this collection the perfect companion for courses in postcolonial theory, world literature, and poetry in translation.

Olivia C. Harrison is Assistant Professor of French and Middle East Studies at the University of Southern California. Teresa Villa-Ignacio is Postdoctoral Fellow in English and Visiting Scholar in French at Tulane University.