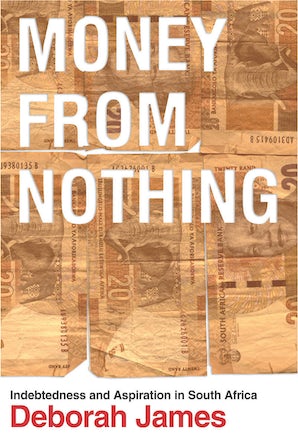 Indebtedness and Aspiration in South Africa

Money from Nothing explores the dynamics surrounding South Africa's national project of financial inclusion—dubbed "banking the unbanked"—which aimed to extend credit to black South Africans as a critical aspect of broad-based economic enfranchisement.

Through rich and captivating accounts, Deborah James reveals the varied ways in which middle- and working-class South Africans' access to credit is intimately bound up with identity, status-making, and aspirations of upward mobility. She draws out the deeply precarious nature of both the aspirations and the economic relations of debt which sustain her subjects, revealing the shadowy side of indebtedness and its potential to produce new forms of oppression and disenfranchisement in place of older ones. Money from Nothing uniquely captures the lived experience of indebtedness for those many millions who attempt to improve their positions (or merely sustain existing livelihoods) in emerging economies.

Deborah James is Professor of Anthropology at the London School of Economics. Her previous books include Gaining Ground? "Rights" and "Property" in South African Land Reform (2007) and Songs of the Women Migrants (1999). She has written for the Mail and Guardian and has appeared in Laurie Taylor's Thinking Allowed, on the BBC.