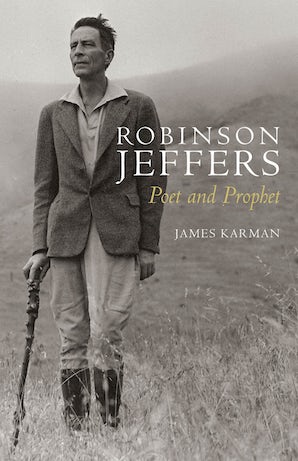 The precipitous cliffs, rolling headlands, and rocky inlets of the California coast come alive in the poetry of John Robinson Jeffers, an icon of the environmental movement. In this concise and accessible biography, Jeffers scholar James Karman reveals deep insights into this passionate and complex figure and establishes Jeffers as a leading American poet of prophetic vision.

In a move that would define his life's work, Jeffers' family relocated to California from Pennsylvania in 1903 when he was sixteen. While a graduate student at the University of Southern California he met Una Call Kuster, a student who was the wife of a prominent Los Angeles attorney, and they began a scandalous affair that made the front page of the Los Angeles Times. They eventually married and escaped to Carmel, California to write poetry; there they would spend the rest of their lives.

At the height of his popularity in the 1920s and 1930s, Jeffers became one of the few poets ever featured on the cover of Time magazine, and posthumously put on a U.S. postage stamp. Writing by kerosene lamp in a granite tower that he had built himself, his vivid and descriptive poetry of the coast evoked the difficulty and beauty of the wild and inspired photographers such as Edward Weston and Ansel Adams. He was known for long narrative blank verse that shook up the national literary scene, but in the 1940s his interest in the Greek classics led to several adaptations which were staged on Broadway to great success.

Inspiring later artists from Charles Bukowski to Czesław Miłosz and even the Beach Boys, Robinson Jeffers' contribution to American letters is skillfully brought back out of the shadows of history in this compelling biography of a complex man of poetic genius who wrote so powerfully of the astonishing beauty of nature.

James Karman, Emeritus Professor of English and Religious Studies at California State University, Chico, is the author of Robinson Jeffers: Poet of California (1987).