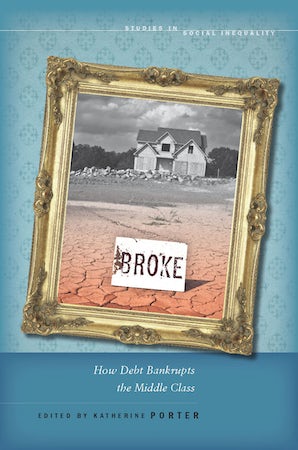 How Debt Bankrupts the Middle Class

About 1.5 million households filed bankruptcy in the last year, making bankruptcy as common as college graduation and divorce. The recession has pushed more and more families into financial collapse—with unemployment, declines in retirement wealth, and falling house values destabilizing the American middle class. Broke explores the consequences of this unprecedented growth in consumer debt and shows how excessive borrowing undermines the prosperity of middle class America.

While the recession that began in mid-2007 has widened the scope of the financial pain caused by overindebtedness, the problem predated that large-scale economic meltdown. And by all indicators, consumer debt will be a defining feature of middle-class families for years to come. The staples of middle-class life—going to college, buying a house, starting a small business—carry with them more financial risk than ever before, requiring more borrowing and new riskier forms of borrowing. This book reveals the people behind the statistics, looking closely at how people get to the point of serious financial distress, the hardships of dealing with overwhelming debt, and the difficulty of righting one's financial life. In telling the stories of financial failures, this book exposes an all-too-real part of middle-class life that is often lost in the success stories that dominate the American economic narrative.

Authored by experts in several disciplines, including economics, law, political science, psychology, and sociology, Broke presents analyses from an original, proprietary data set of unprecedented scope and detail, the 2007 Consumer Bankruptcy Project. Topics include class status, home ownership, educational attainment, impacts of self-employment, gender differences, economic security, and the emotional costs of bankruptcy. The book makes judicious use of illustrations to present key findings and concludes with a discussion of the implications of the data for contemporary policy debates.

Katherine Porter is Professor of Law at the University of California Irvine School of Law. In 2010-2011, she was the Robert Braucher Visiting Professor at Harvard Law School. She is an expert in consumer credit law and has testified several times before Congress. Her published research addresses mortgage servicing, financial education, and consumer bankruptcy.