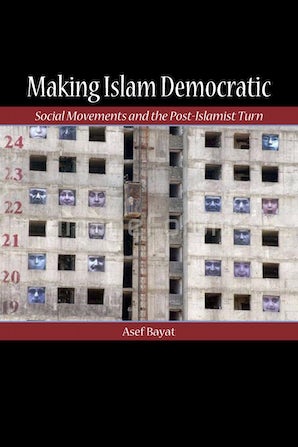 Social Movements and the Post-Islamist Turn

Whether Islam is compatible with democracy is an increasingly asked question, but ultimately a misguided one. In this book, Asef Bayat proposes that democratic ideals have less to do with the essence of any religion than with how it is practiced. He offers a new approach to Islam and democracy, outlining how the social struggles of student organizations, youth and women's groups, the intelligentsia, and other social movements can make Islam democratic.

Making Islam Democratic examines in detail those social movements that have used religion to unleash social and political change, either to legitimize authoritarian rule or, in contrast, to construct an inclusive faith that embraces a democratic polity. It provides a fresh analysis of Iran's 1979 Islamic revolution—how it has evolved into the pervasive, post-Islamist reform movement of the early twenty-first century, and how it differed from Egypt's religious "passive revolution."

Focusing on events from the Iranian Revolution to the current day, with a comparative focus on Islamism, post-Islamism, and active religious expression across the region, Bayat explores the highly contested relationship between religion, politics, and the quotidian in the Middle East. His book provides an important understanding of the great anxiety of our time—the global march of "Muslim rage"—and offers a hopeful picture of a democratic Middle East.

Asef Bayat is Professor of Sociology and Middle Eastern Studies and holds the Chair of Society and Culture of the Modern Middle East at Leiden University, the Netherlands. He is the author of Life as Politics: How Ordinary People Change the Middle East (Stanford, 2009) and Street Politics: Poor People's Movements in Iran (1997).