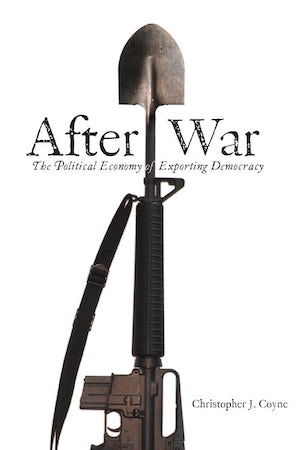 The Political Economy of Exporting Democracy

Why does liberal democracy take hold in some countries but not in others? Why do we observe such different outcomes in military interventions, from Germany and Japan to Afghanistan and Iraq? Do efforts to export democracy help as much as they hurt? These are some of the most enduring questions of our time.

Historically, the United States has attempted to generate change in foreign countries by exporting liberal democratic institutions through military occupation and reconstruction. Despite these efforts, the record of U.S.-led reconstructions has been mixed, at best. For every West Germany or Japan, there is a Cuba, Haiti, Somalia, or Vietnam.

After War seeks to answer these critical foreign policy questions by bringing an economic mindset to a topic that has been traditionally tackled by historians, policymakers, and political scientists. Economics focuses on how incentives influence human action. Therefore, within an economic context, a successful reconstruction entails finding and establishing a set of incentives that makes citizens prefer a liberal democratic order. Coyne examines the mechanisms and institutions that contribute to the success of reconstruction programs by creating incentives for sustained cooperation.

Coyne emphasizes that the main threat to Western nations in the post-Cold War period will not come from a superpower, but rather from weak, failed, and conflict-torn states—and rogue groups within them. It is also critical to recognize that the dynamics at work—cultural, historical, and social—in these modern states are fundamentally different from those that the United States faced in the reconstructions of West Germany and Japan. As such, these historical cases of successful reconstruction are poor models for todays challenges. In Coynes view, policymakers and occupiers face an array of internal and external constraints in dealing with rogue states. These constraints are often greatest in the countries most in need of the political, economic, and social change. The irony is that these projects are least likely to succeed precisely where they are most needed.

Coyne offers two bold alternatives to reconstruction programs that could serve as catalysts for social change: principled non-intervention and unilateral free trade. Coyne points to major differences in these preferred approaches; whereas reconstruction projects involve a period of coerced military occupation, free trade-led reforms are voluntary. The book goes on to highlight the economic and cultural benefits of free trade.

While Coyne contends that a commitment to non-intervention and free trade may not lead to Western-style liberal democracies in conflict-torn countries, such a strategy could lay the groundwork for global peace.

Christopher J. Coyne is Assistant Professor, Department of Economics, West Virginia University, a Research Fellow at the Mercatus Center, and an Associate Editor for the Review of Austrian Economics. He has published articles in numerous scholarly journals, including Cato Journal, Constitutional Political Economy, Economic Journal, Journal of Economic Behavior and Organization, Kyklos, and Review of Political Economy.