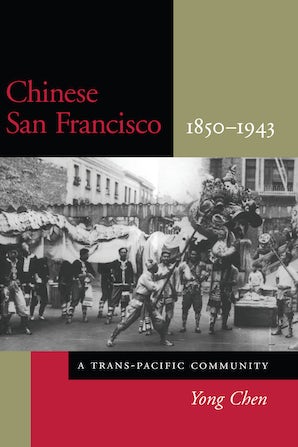 Founded during the Gold Rush years, the Chinese community of San Francisco became the largest and most vibrant Chinatown in America. For those Chinese traveling between the Old World and the New, San Francisco was a port of entry and departure. Many Chinese settled there, forming one of the oldest continuing ethnic communities in urban America.

This is a detailed social and cultural history of the Chinese in San Francisco, relating the development of various social and cultural institutions, ranging from brothels to the powerful "Six Companies." The book recaptures in vivid detail not only the community's collective mentalities but also the lives of ordinary people—laborers, theater-goers, gamblers, and prostitutes. In so doing, the author achieves what has been missing from virtually all the historiographic writing on the Chinese in America—he brings to life individual personalities with their varying human qualities.

The book shows the persistence of Chinese social patterns in San Francisco Chinatown, and demonstrates how the community helped shape white America's view of Asians in general and the development of race consciousness and strife. The author challenges several long-accepted views, such as the myth that the Chinese exodus to California in the mid-nineteenth century occurred mainly because of impoverishment in South China and the notion that the overwhelming majority of Chinese women in San Francisco were prostitutes. He also makes insightful comparisons of Chinese Americans with other ethnic groups.

The book makes imaginative use of a wide range of materials, private and public, fictional and statistical, in both Chinese and English, produced by both pro- and anti-Chinese sources. Among these are Chinese-language newspapers (including their advertisements), handbills, personal diaries, and other cultural productions. The author offers multidisciplinary analyses of such documents, showing the possibilities of extracting rich historical information from texts created for very different purposes.

Yong Chen is Associate Professor of History and Asian American Studies at the University of California, Irvine.