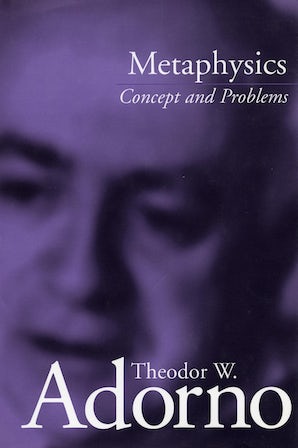 This volume makes available in English for the first time Adorno's lectures on metaphysics. It provides a unique introduction not only to metaphysics but also to Adorno's own intellectual standpoint, as developed in his major work Negative Dialectics.

Metaphysics for Adorno is defined by a central tension between concepts and immediate facts. Adorno traces this dualism back to Aristotle, whom he sees as the founder of metaphysics. In Aristotle it appears as an unresolved tension between form and matter. This basic split, in Adorno's interpretation, runs right through the history of metaphysics. Perhaps not surprisingly, Adorno finds this tension resolved in the Hegelian dialectic.

Underlying this dualism is a further dichotomy, which Adorno sees as essential to metaphysics: while it dissolves belief in transcendental worlds by thought, at the same time it seeks to rescue belief in a reality beyond the empirical, again by thought. It is to this profound ambiguity, for Adorno, that the metaphysical tradition owes its greatness.

The major part of these lectures, given by Adorno late in his life, is devoted to a critical exposition of Aristotle's thought, focusing on its central ambiguities. In the last lectures, Adorno's attention switches to the question of the relevance of metaphysics today, particularly after the Holocaust. He finds in metaphysical experiences, which transcend rational discourse without lapsing into irrationalism, a last precarious refuge of the humane truth to which his own thought always aspired.

This volume will be essential reading for anyone interested in Adorno's work and will be a valuable text for students and scholars of philosophy and social theory.